Hiking the PCT, you see the best and worst of humanity. On the best of days you receive help from a random stranger, or have a sobering conversation with a trail mate with shared virtues, giving you hope in the future. On the worst of days you see humanity tearing at the seams of the environment you’ve become so seamlessly integrated with.

Today is a day starting like many others. In the morning we hike several miles in the cool early morning hours, stopping to have breakfast at a bench high above Deep Creek. We then continue up trail as it follows along Deep Creek for miles. We stop again at a feeder creek for a snack before the day’s heat intensifies.

Two hikers approach as we’re soaking our feet. It’s a mustached young man with a girl behind him. His shirt is unbuttoned and he has a cross tattood on his arm. “How far is it from here” he asks, “it’s about two miles, right?”

“How far is what?” We respond.

“This is deep creek” Lupine responds. We’ve been hiking above Deep Creek all morning.

We don’t know. We don’t care. We’ve talked to other hikers planning to stop at the spring, but Lupine and I aren’t too interested. Maybe it’s because I’m a cactus and prefer to keep my distance. But, I’ve also been to hot springs before and they were disgusting. People have a tendency to trash them. The nicest ones I’ve ever been to were the ones privately managed. When they’re unmanaged and easily accessible, people treat them like an amusement park. But there’s no one to clean up after you in the wild.

We overhear the guy and girls conversation. He’s telling her about how Vitamin C has energy in it, and bragging about how he can tell time by his surroundings when he’s out in nature. He’s a real Indiana Jones I think to myself. The girl slips when her backpack catches on a rock, and he barely shows concern. When they walk on, Lupine says to me “she could do better”. We laugh about our mutual annoyance with people.

Another few hikers come by and we chat with them briefly. Before we leave, Lupine asks them if they’ve seen Nickels.

“Yeah” they say. “He should be right behind us any minute now.”

“If you see him, you should try dropping the following song lyrics into conversation with him: I want to know what love is… and I want you to show me…

Nickels had the Foreigner song stuck in his head yesterday, and shared it with us and another hiker, Chef. It’s a mischievous thing to put a catchy song in the ear of another hiker. There is something about walking all day that makes it so hard to get a song out of your head!

So, we decide to pay it backward. Our hiker friends agree and we commence with hiking.

As we hike all of a sudden Lupine shouts “ahhh” and leaps forward on the trail. There’s a sound as if a water sprinkler just turned on. There’s a rattlesnake sitting just above the trail about 7 feet. I hate snakes of all types and especially rattlesnakes, although it’s fortunate they give warning.

The snake’s looking at Lupine, and she’s a safe distance away. She suggests going below the trail. I step below the trail into the shrubs afraid now I’ll find another. Lupine suggests I move fast. As I step forward the rattlesnake turns and lifts it’s head toward me. I leap quickly forward to the trail next to Lupine and turn around to checkout the culprit of my fears. Later Lupine tells me I was looking a bit white. I assure her that snakes are my cryptonite.

We spot some flowers and they lighten the mood.

A couple of miles later we spot some people on a cliff across the river. “Maybe that’s where the hot springs are” I say to Lupine.

We hike further and begin to hear music and we see a number of campers by the river. There’s a trail going up the cliff on the other side of the river, and there are people everywhere along the river. Some are clothed. Some are not. For some reason it’s fat old men who seem to most often opt out of their clothing in situations like this.

As we near the human enclave we spot toilet paper in the bushes. We see plastic bottles flung or lost never to be retrieved. Empty bags of chips. A tampon wrapper. Humans are disgusting. There they are down below in the water, surrounded by garbage in the surrounding hills. There must be 50 of them. Even without Covid-19, this would be a bad choice.

Lupine and I look at each other, both disgusted. As if we were ever entertaining the idea of stopping, the answer now is certainly “hell no”. The air is hot and we could use a break but we push up the hill motivated by the desire to put distance from humanity.

As we climb the hill we spot garbage and pack it into our bags. How is it that we as thru hikers who are hiking for long distances can manage to pick up the garbage for those who have barely walked a day to get here? Yet, they can’t pack they’re own trash out.

As we hike further along the canyon, we remain above the creek. Rocks are spray painted with graffiti. It’s endless. We find satisfaction when Lupine spots some toilet paper tucked in around some poison oak. At least nature will have some revenge. But I’m sad its not in equity to the damage done by humans.

We are eager to leave this section behind us. We hike fast in the heat, Lupine with her umbrella to block the sun.

Several miles later we spot 4x4s down near the river, as it bends beneath the Mojave dam, often called the Deep Creek Spillway. Motorcycles and ATVs are whizzing all around. The sun is blistering hot, so we hike fast, to reach the water. As we reach the dirt next to the dam we see a sign that says no motorized vehicles.

Below the dam, we pop out on a road then find an entry to the creek. We wade across to a sand bar and toss our bags down to cool off. We put the water over our faces and fill our bottles after filtering. Dune buggies cruise by on the road above along with motorcycles and ATVs kicking up dirt. It’s obnoxious we think, and not for us, but to each their own.

As we relax on the sand bar two buggies approach from our left, driving in the creek.

The vehicles are in the water, driving up against the creek, wheeled by wispy bearded rednecks with children in the back seats. They drive up the stream turning it brown and full of silt. This is the same creek we just filtered water to drink from. This is the same creek endangered frogs live upstream in. This is the largest creek we’ve come to in all of California, since starting at the Mexican border. It’s one of the few sources of water in a dry, dry desolate landscape. And here come the buggies driving back down stream now, again tossing up debris, likely crushing any chance for fish to spawn or frogs to nest. Humans are disgusting.

With our blood boiling, Lupine and I hoist up our bags resolute on getting far away from this. Our hope in humanity is devastated by what we’ve seen today.

As we hike up stream we notice a young man and a woman walking down stream in the creek. They have a net. We ask them what they’re looking for. The man says there used to be a lot of fish in this creek when he was young, but not so much anymore. I say “it probably doesn’t help with people driving through the river.”

They agree, and Lupine says “is that even legal?”. It can’t be. The man says it isn’t but motorized vehicles aren’t even allowed here either and obviously that law is not being followed. The man laments how the area has changed since he was younger. I’m filled with sadness by the moment.

He says something about how “too many killings happen in this area” and I assume he’s not referring to frogs in the creek but I do not pry further. We bid them a good day and carry on. We see more 4x4s causing destruction and we resolve to catch up to Horse. It’s already about 5 pm but Lupine says I’ll walk 10 miles if that’s what it takes to get away from this. I say I’ll gladly walk 20. We’ve already done about 15.

As we hike on we put distance between us and the barbarians we again notice the beauty of the hills, yellow flowers and the sunset.

I contemplate as I walk: what’s so civil about civilization? Every time I return to the throngs of humanity I see little signs of civility. Instead I see hedonism.

As the sun lowers behind the San Gabriel mountains, we spot another snake, but not a rattler. It’s stretched out long beside the trail. We toss a rock but it doesn’t move. So, we bypass it below the trail. I hate snakes, but I might prefer them to the acts of humans I’ve seen today. They just don’t want to be stepped on. And that I understand.

In about 3 miles we cross a stream as the sun is setting and spot Horse next to his tent. He waved and we walk up to talk to him. It feels so nice to be reunited with other PCTers. We chat and laugh and restore ourselves partially from an odd and upsetting day.

It’s a warm night and we leave the rain fly off to see the stars. The frogs sing us to sleep. I want to apologize to them for my kind. I’m embarrassed by what we do, simply because we can.

May tomorrow be a better day for humanity and nature both. 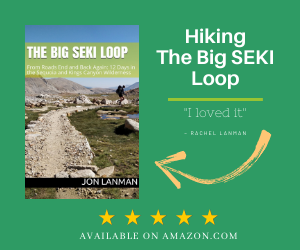